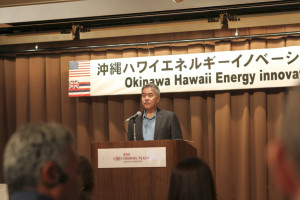 On October 9, 2015 the Hawaii-Okinawa Energy Innovation Forum was held in Naha. This was part of the continuation of the Okinawa-Hawaii Clean Energy Partnership which was first signed in June 2010 between METI, the US DOE, Okinawa Prefecture, and Hawaii.

Under the cooperation agreement, there have been OTEC workshops each year, alternately hosted by Kumejima Town in Okinawa, and Kona City in Hawaii. From these workshops, in 2011 Kumejima Town and Hawaii County signed a sister city relationship, which now included high school student exchanges.

Governor David Ige of Hawaii attended the event which consisted of presentations from both Hawaii and Japan, and a panel discussion. The forum seemed successful with a nearly full audience.