On March 18, 2016 Humanweb broke ground for their Virus-Free Hatchery and Research Center on Kume Island. Humanweb is a large oyster bar company with stores around Japan selling raw, high-end oysters. Recently, noro-virus scares around the world has significantly damaged the popularity of oysters in Japan, when eaten raw. In a country famous around the world as the home of sushi, it may seem odd to visitors from Europe that most oysters are eaten cooked. To improve safety, Humanweb has utilized clean deep seawater at its distribution centers to clean its oysters before sending them on to their bars. Still, with oysters grown in the ocean there is always a perceived risk. Since 2012, Humanweb has been researching the development of onshore oyster farming, hoping to have the world’s first fully land-based hatchery to grow-out system to ensure oysters are virus-free and safe for raw consumption. In order to reach this goal, Humanweb broke ground on a new state-of-the-art facility intended as the first step towards commercial capacity for oyster hatchery  and as a test-bed for onshore grow-out. Using deep seawater from the Okinawa Deep Seawater Research Center may soon provide the prefecture with an entirely new product as oysters are not currently farmed in Okinawa due to warm surface temperatures. The ceremony on March 18th included consultants on the project, local deep seawater industry representatives, Kumejima Town Mayor Haruo Ota, and of course, oysters to enjoy afterward. 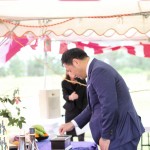 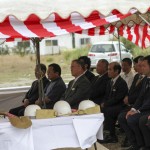 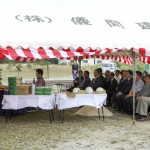