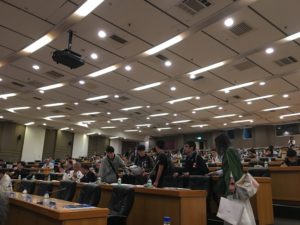 The Taiwan Deep Ocean Water Association held an international conference in Taiwan at the National Taiwan University on October 30, 2017. Speakers from around the world, including from GOSEA, will spoke on the current state of OTEC and Deep Seawater Use and discussed the potential for applications in Taiwan.

The Conference was held at the National Taiwan University in Taipei, attended by more than 100 government, industry, and academics interested in DSW related industries. The Conference also marked the formation of the Taiwan DSW Industry Association, a new inter-company organization to help promote and develop deep seawater application in Taiwan. The beginning was marked by a ceremonial “tape-cutting” involving filling the letters DSW with blue water. 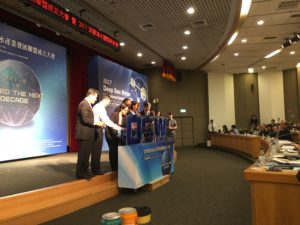 Below are a selection of presentation titles given at the event:

The conference was closed with a panel of speakers, with questions from the audience.

One of the surprising products introduced was flavored sparkling water made from DSW with pokemon-themed cans. Pokemon fans now have one more reason to take a trip to Taiwan, as they’re only sold there.